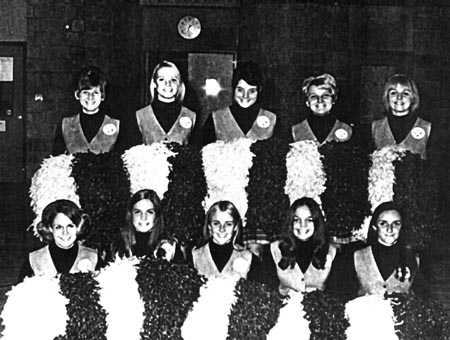 The smiling faces in this picture belied the fact that Pittsburgh Steeler fans had less to cheer about in 1969 than they did in 1968. A new head coach by the name of Chuck Noll had just been hired and one of his first decisions was to use a first round draft pick on some unknown defensive player from North Texas State. Coach Noll had to start building somewhere, but shouldn't he have used this valuable draft pick to strengthen his very weak offense? "Monday Morning Quarterbacks" all over Pittsburgh were hotly debating this question. This player would soon become known worldwide as "Mean" Joe Greene and he, along with Mel Blount, Jack Ham and Jack Lambert would become the most respected defensive line in football. The "Steel Curtain" would make D-E-F-E-N-S-E Pittsburgh's battle cry. However, this is still 1969 and our men in Black & Gold won the first game of the season against the Detroit Lions and then lost every game thereafter. The 1969 season ended with the Steelers worst record since 1944 (that year they finished 0-10). 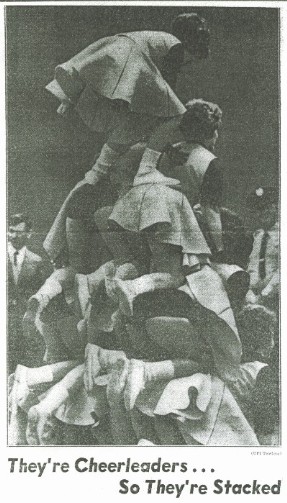 The 1963 Steelerettes and the 1969 Steelerettes have something in common. We both have been immortalized in the Pro Football Hall of Fame in Canton, Ohio. Among the films that are shown in the HOF Theater are Football Bloopers. The opening scenes of two different bloopers films show the pyramids of the 1963 and the 1969 Steelerettes collapsing in one of our infamous heaps. Not a pretty sight. The '63 squad is still one-up though. A picture of our pyramid taken from a rear view, with our skirts flipped up and our butts showing appeared in a men's magazine. The caption read "They're cheerleaders . . . so they're stacked". A friend of mine bought the magazine while on a trip to New York City and got a real kick out of showing it to me and everyone we knew. Of course, I feigned embarassment but seeing my picture (even if it was only the butt end) in an international magazine was kind of a hoot. Besides, no one could see our faces.

This was to be the last year for the Steelerettes. In addition to the "look" becoming outdated, Robert Morris now had its own football team, complete with cheerleaders, and interest in the Steelerettes had diminished. Robert Morris College had grown over the last few years and the student body had changed. The school was successfully developing an impressive curriculum and offered many extra-curricular activities. Students seemed to be more interested in school related events and less interested in cheering for a professional team that appeared to be going nowhere. Too bad we couldn't find someone with a crystal ball. The 1970's were destined to become the decade that would redefine Pittsburgh Steelers Football. But, in 1969, who knew?